The Secret World of Christoval Alvarez 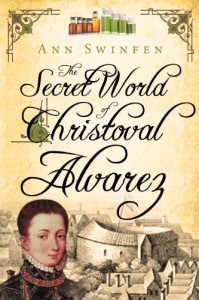 This was a perfectly OK read.

I filed it under 'mystery' and 'historical mystery,' but what it really is, is a historical thriller.

Unfortunately, I've read quite enough about the Babbington Plot to not really be surprised.

The setting and characterization were done well.  Christoval Alvarez is a 16-year-old physician-in-training in London, learning under his father, a former professor of medicine at Coimbra.  They are both refugees from Portugal, and have been living in England, hiding the fact that they are Jews, for four years.  (It is 1586.)  Christoval fears the Inquisition, though unfortunately we don't hear anything at all about or what happened to the rest of the family (grandparents, mother, two siblings).  One presumes the worst, naturally.

Also, Christoval seems to think Robert Poley, admittedly not a nice man, and clearly guilty of blackmail, is the worst person ever invented.  A wee bit of a stretch, eh?

I did like all the details of working at Walsingham's spy factory, though.

A perfectly OK read.  I'd probably read a sequel, though I wouldn't rush out to buy it necessarily.