The Singer From Memphis 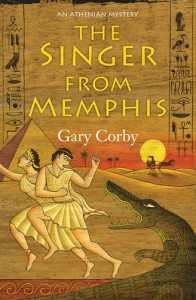 This series may not be the greatest series of historical mysteries ever written, but golly, are they fun.

This one takes Nico and Diotima off to Egypt.  They have been hired by Herodotus to be his bodyguards while he does research for his book (The Histories), which he is afraid no one will ever read.  Meanwhile, Pericles would like him to do some official unofficial work for Athens down there - Egypt has rebelled from the Persian Empire, and any enemy of Persia is a friend of Athens.  (The Athenians have already sent a fleet of 200 triremes under their top admiral, but more aid, of a specialized nature, may be required.)

Then they run into pirates, crocodiles, and grumpy camels, among other problems.

Another fun romp in the series.  Unfortunately very little of Socrates, his annoying younger brother.