Agnes and the Hitman 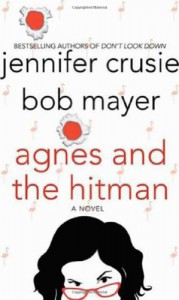 Agnes publishes her syndicated food column under the name of "Cranky Agnes," inspired by her anger management issues; she is, however, justifiably cranky one night when a teenaged mobster shows up with a gun, attempting to kidnap her dog.  (She whacks him over the head with a handy cast iron frying pan.)

Luckily for Agnes, her uncle the semi-retired(?) mobster has sent a hitman, Shane, to look after her.  And the five million dollars that might be stashed in her house.  What ensues are more attempted hits (on the dog, Agnes, and assorted other people), police investigations, non-police investigations, flamingos, explosions, frying pans, larceny, and a high-society mob wedding.